I loved Sophie Cameron’s debut Out of the Blue, which explores grief and loss through magical realism, as well as featuring a beautifully-told love story. I was delighted to get the opportunity to interview Sophie Cameron and ask her about her writing process and LGBTQ+ representation in YA. 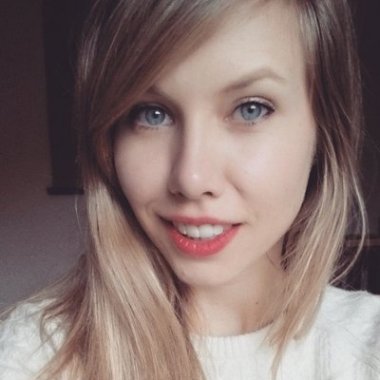 Jenny Duffy: The title Out of the Blue fits the book so well – in terms of grief, the suddenness of the Beings’ falls. Did you have this title all along, or did it come later in the process?

Sophie Cameron: I actually had a really hard time finding a title! I tried out lots (including some really cheesy ones) but nothing really fit. I was thinking about it on my walk to work one morning when I spotted a sticker for a community/arts centre in Edinburgh called Out of the Blue – I figured that worked pretty well, and it stuck!

JD: Which part of the story came first – the magical elements, the characters or the themes?

SC: The idea of the angels falling to earth came first (from a Lynx Deodorant advert, randomly enough) and then the characters. I never really think about the themes I want to include in a book at first; I try to focus on the characters and the story and let them arise naturally, then work on bringing the themes out later.

JD: I loved the scene in which Teacake is shown paintings of angels, were there particular images you used for reference when imagining the Beings?

SC: Their colouring was inspired by street artists in Barcelona: I used to walk past golden and silver angels every day on my way to work, which gave me the idea of making them different metallic colours. Otherwise I just invisioned them as looking like people with wings, but all the paintings mentioned in the book are based on real works of art. It was really fun to research!


JD: What are some of your favourite LGBTQ+ YA books?

SC: More Than This by Patrick Ness, You Know Me Well by Nina LaCour and David Levithan, History is All You Left Me by Adam Silvera, We Are Okay by Nina LaCour, Girlhood by Cat Clarke, Noah Can’t Even by Simon James Green, It’s Not Like It’s a Secret by Misa Sugiura, The Summer of Jordi Perez by Amy Spalding… and I’m really looking forward to Anger is a Gift by Mark Oshiro, Running With Lions by Julian Winters and Laura Dean Keeps Breaking Up With Me by Mariko Tamaki and Rosemary Valero-O’Connell, which are all out this year.

JD: In the book Jaya says ‘There were all those words – labels that we didn’t need, but that wrapped themselves around us, suffocating whatever it was that we had.’ What are you own feelings on labels? Do you see them as helpful or damaging, or both?

SC: I think they can be restrictive for some, but empowering for others. Finding the right label was important for me when I was younger as it helped me work out who I was, but I don’t find them quite so important (for myself) now, and I know some people who have never wanted or needed them – either position is totally valid, so I think it’s good to show characters who both do and don’t identify with labels in books.

JD: Different characters in Out of the Blue have very different responses to their sexuality, in terms of acceptance and coming out. Were you very conscious of the importance of showing a range of experiences?

SC: Actually, not really… it just happened naturally as it fit the story. Obviously different people will have hugely different experiences with regards to coming out or being accepted for their sexuality, and if books reflect that then that’s great. But I don’t think authors should necessarily feel they have to show that variety, either. It can be too much to fit into one story, for one thing, and I also think we need more stories with LGBTQ+ characters that don’t touch on issues at all.

JD: The relationship between Jaya and Allie has a beautifully slow build – what do you think is the most important ingredient in writing a romance?

SC: For me, I think it’s that the characters’ relationship feels quite balanced and that they both have their own arcs outside of the other person – my favourite romance in YA is The Sun is Also a Star, where both characters have their own storylines that become intertwined. Romance isn’t usually the main draw to a book for me, though, so it may be totally different for other readers!

JD: What would you like to see more of in YA?

SC: I think the most pressing issue in YA is a lack of books by authors of colour – there are only a handful published in the UK every year, so I want to see many more of those and lots of support for those that are published. I’d also like to see more diversity in general, and more stories that are focused on friendship or sibling relationships.

JD: What’s next for you writing wise?

SC: I’ve just finished the second draft of my second book, which will be out in 2019. I’m having a wee break to catch up on reading and then I’ll get started on what will hopefully be Book 3!

JD: Finally, a piece of writing advice you would pass on?

SC: The author Kirsty Logan mentioned in a talk a few years ago that she aims to write just 100 words a day, so I tried that and it worked really well for me: it’s short enough as a goal that even if I’m feeling totally uninspired (or lazy) I can usually manage a few sentences, and quite often I end up writing way more than I’d intended anyway.