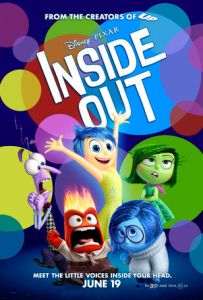 Inside Out poster from pixar.wikia.com

Pixar’s latest movie, Inside Out, has been receiving rave reviews and got a standing ovation at the Cannes Film Festival. I am going to see it over the weekend, and I am Very Excited. Inside Out has a fantastically funny cast and is sure to be an emotional rollarcoaster. It is a journey into the mind of an 11-year-old girl, as her emotions are in tumult after moving to a new city. Joy (Amy Poehler), Sadness (Phyllis Smith), Disgust (Mindy Kaling) and Anger (Bill Hader) are the ringleaders of Riley’s emotions. In honour of this new release, here are my top five ‘feels’ moments from Pixar movies:

The clear number one is the heart wrenching opening sequence to Up, I am getting emotional just thinking about it. The montage of Carl and Ellie’s relationship was so beautifully done, and my heart soared like Carl’s house when he followed Ellie’s message in her Adventure Book ‘Thanks for the adventure – now go have a new one!’

I fell completely in love with this Oscar-nominated Pixar short. It is beautifully done in the hand-drawn animation style in black and white (with the red lipstick giving a pop of colour). It has a simple, yet very moving storyline. An unlikely meet-cute at a train station and what seems to be a missed connection, until a paper plane nudges this couple back together. 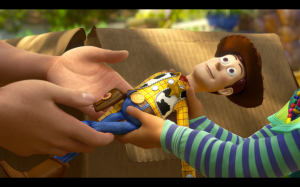 Jessie’s song, When She Loved Me, is one of Pixar’s most moving moments. Like the end of Toy Story 3, it will move older viewers more as it makes us think of leaving childhood behind. Nostalgic and emotional, and beautifully sung by Sarah McLachlan. 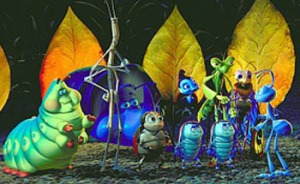 This was a favourite movie of mine as a child. A Pixar classic, A Bug’s Life has many of the hallmarks of a great Pixar movie – an unlikely hero, wacky characters, humour and emotion. While this movie has its sad and terrifying moments,  it is also one of the funniest Pixar movies and the motley crew of circus performers are my favourite thing about the film.

Leave your own favourite Pixar moments and movies in the comments, and enjoy Inside Out if you’re going to see it too!