I interviewed the fabulous Ruth Frances Long when A Hollow in the Hills, the second book in her Dubh Linn trilogy, was released last year. Now that the final volume, A Darkness at the End, is out in the world I caught up with Ruth to chat fantasy, trilogies, mythology, YA and more…

1)   A Darkness at the End, the finale of the Dubh Linn trilogy, was published this autumn. What was it like to finish the series?

A bit of a rollercoaster, to be honest. I had a difficult time with the second book, A Hollow in the Hills, so I thought book three, A Darkness at the End might kill me. But as it happened, the story came together quite easily and the characters behaved themselves for once. Even the ones who did not want to die. It is actually incredibly fulfilling to know the complete story is out there now and I’m really pleased with the way it worked out. 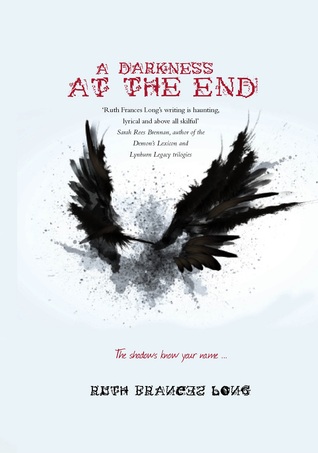 2)    There were some fantastic locations in the third book – was there one that stood out for you? I loved the scene in the National Gallery.

So difficult to choose just one so I’ll cheat a little. There’s a sequence where three characters go through the tunnels carrying the River Poddle until they reach St. Patrick’s Cathedral and then go to Marsh’s Library which is one of my favourite parts of A Darkness at the End. There’s a lot going on with the characters at this point, especially with Clodagh and there’s a certain symbolism tied in with this underground journey. Usually when researching a location I would go there, but with the Poddle, being a subterranean river, I couldn’t do that. Luckily I was able to find some documentary footage and photos online of the route and used that for reference.

If I say Brí will it frighten everyone?

In reality, there is probably a bit of me in all of them, and a bit of all of them in me.

4)    Did you have a favourite character to write, or one whose head you found difficult to get into?

The Magpies became my favourites to write over the course of the three books. They were minor characters to begin with, hired thugs who didn’t have that much to do, but they grew into something much more and I was so sorry to say goodbye to them at the end. Not that I’d want to hang out with them or anything!

As for difficult to pin down, I was very worried about including the Morrigan in the final book because she’s such a huge and important character in so much literature and I wanted to do her justice.

5)    Do you prefer the first draft stage, or the editing stage?

A mixture of both. There are moments in the first draft when the story is flowing and it all just feels like magic. However, the editing stage often feels more solid and rewarding to me.

6)    Could you tell me a bit about the Morrigan in the third book – when did she come into your mind, and what did the research process for this character involve?

I always wondered if she would show up in the books. She’s a very difficult character to pin down and I didn’t want to make mistakes. I read a lot, of course and winnowed through various legends where she appears. I also spoke to a friend dedicated to the Morrigan, and we discussed her various aspects at length which was really eye opening and fulfilling. She’s often portrayed as a goddess of death, but she’s more like a goddess of life lived to the full on the edge of death. She’s a war goddess, and there’s a tremendous amount of energy in that. I see her and Brigid (who I portrayed as Brí) as being two sides of a coin, intricately linked together and immensely powerful for that.

7)    You have really strong female characters in the trilogy, particularly with the matriarchs. Was creating a female power structure in the books something you did consciously?

When you look at Irish legends there are incredibly strong and determined women running all the way through them. Because of the Christianisation of these stories when they were written down they are often given a very bad ending. But we still remember the likes of Maeve and Gráinne as the key character in the tale.  I really wanted hierarchy in Dubh Linn to reflect that, so the matriarchs came about quite naturally. They’re also very strong characters so it’s hard to imagine them being told to sit down and be quiet and putting up with that.

8)    There are some dramatic (and devastating!) moments in A Darkness at the End. What have reader reactions been like?

Throughout the series I’ve tried to confront dark moments head on. The biggest reactions I had from readers were from the end of A Hollow in the Hills and a certain death in A Darkness at the End. My husband is still only tentatively speaking to me about it.

9)    I love how you bring figures and creatures from Irish mythology into the Dubh Linn books. Are there other legends or mythologies you would like to explore in your writing?

I’ve always been fascinated with legends and folklore so there are many. I’m currently thinking quite a bit about Arthurian legends so I’d love to explore them some more.

10)  What are your favourite YA books you have read this year?

In no particular order… Caramel Hearts by Elizabeth Rose Murray, Six of Crows by Leigh Bardugo, The Call by Peadar Ó Guilín and Nothing Tastes as Good by Claire Hennessy.

Thanks to Ruth for her fascinating answers, I can’t wait to read more of her books! If you are a fan of fantasy, romance or mythology (or all three!) be sure to check out the Dubh Linn trilogy (A Crack in Everything, A Hollow in the Hills, A Darkness at the End)