If you like cake and YA, I’m sure that you will be a fan of Love, Lies and Lemon Pies by Katy Cannon. The book is about a bake club, and there is a delicious recipe before each chapter. With the Great British Bake Off in full swing, I was delighted to chat to this author about cake…and writing of course!

Which Bake Club character were you most like as a teenager?

Probably Lottie, but without so much angst! The opening scene of the book, where she gets called into the head of year’s office because the school is worried about her, is actually based on something that happened to me – although for very different reasons. I remember very well that feeling of giving the teachers what they want to hear or see, just to stop them calling my parents!

Do you have a favourite scene from Love, Lies and Lemon Pies?

Actually, I have two! One is the scene with Mac and Lottie hiding under the stairs at Grace’s house, eavesdropping shamelessly on Jasper and Ella. I love the part where their conversation turns to things Mac remembers about Lottie through the years, and she realises she isn’t as forgettable and invisible as she always thought.

The other is a scene that actually got added in very late in the process – possibly only in the final draft. It’s the bit at Grace’s party where Mac and Lottie slope off to hang out on the trampoline together. Apparently all the good stuff happens at Grace’s house!

Did you plan the recipes ahead of writing, or see what recipe each chapter called for as you wrote? Did you always plan to intersperse recipes throughout the book?

The idea for including recipes in the book came seconds after the idea to write about a Bake Club. I was talking the idea through with my agent (over cake and coffee) and when the idea of the recipes came up we both got really excited about it.

Some recipes were just a natural fit. I brainstormed a few of my favourite sweet treats and savory bakes while I was plotting out the book, but after that I just picked the most appropriate bake for the chapter I was writing. It came together surprisingly easily!

Which was your favourite recipe from the book? And which took the longest to perfect? Did you have any baking disasters?

The Pecan Loaf was almost a disaster of the plotting kind. All along I’d had it in my head that this was what Mac would bake – a savory pecan bread. But then I realised that he wouldn’t have time to let the dough rise during the competition, so I had to come up with a whole new recipe at the last minute!

The chocolate chip cookies, and Mac’s chocolate brownies are two of my favourites – mostly because I love chocolate! But Mac’s Grandma’s Gingerbread recipe is actually my Grandma’s recipe – discovered in an old notebook a few years after she died. So I have a soft spot for that one too. 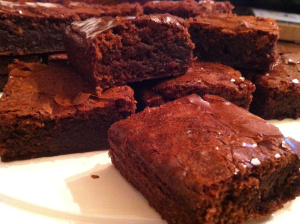 What is your favourite kind of cake?

Strangely, one that never made it into the book! I adore lemon drizzle cake – my brother makes a particularly good one.

Could you tell us about your new book, Secret, Schemes and Sewing Machines?

Secrets, Schemes & Sewing Machines is Grace’s story, told from her point of view as she lives through her most difficult school year yet. She has big plans for the year – she wants to star in the school play – but family dramas mean she misses the audition. She throws a suitably Grace-like hissy fit, convincing the gorgeous new boy, Connor, that she’s a high maintenance diva, and then somehow ends up volunteering to organise and make the costumes for the play to show him he’s wrong.

It was so much fun to revisit the Bake Club group, but see them from another point of view, and follow a different trajectory. The book is very much about Grace learning the sort of person she wants to be, and that was really interesting to write. I also loved coming up with all the sewing projects!

It depends how hungry I am… No, really I love both, but in different ways. Baking tends to give more immediate satisfaction, but I also really enjoy taking time to choose or develop a pattern, pick fabrics and supplies, and have some time just me and my sewing machine.

Do you watch any baking shows? Who are your favourite bakers?

Obviously, the Great British Bake Off. But I like a lot of cookery programmes generally. I used writing Love, Lies and Lemon Pies as a bit of an excuse to stock up on recipe books too – lots by Mary Berry, Paul Hollywood, The Fabulous Baker Boys, and anything with cake in the title! I also love the Primrose Bakery books.

Describe the showstopper cake you would make to introduce yourself on the Great British Bake Off.

Oh, that’s a great question! Let me see… I think I’d like to bake a Mad Hatter’s Tea Party cake – a whole table, topped with tiny individual cakes and treats of all sorts, icing hats and a dormouse in a teapot!

What books would you recommend for fans of Love, Lies and Lemon Pies?

The Geek Girl series, for definite. My Secret Rock Star Boyfriend by Eleanor Wood. Anything by Sarah Dessen. And maybe Jenny Han as a next step…

Could you tell us about your writing process? Are you a planner?

It tends to vary from book to book, to be honest. But I am definitely a planner – both plotwise and timewise. I need to have a very firm idea of what or how much I need to write when, or I start  worrying about deadlines.

Usually I start by just thinking about the story I want to tell, scribbling down notes as they occur to me about characters, scenes, themes or images. Then eventually, when it feel right, I start piecing it all together until I have a firm grasp of the characters and at least an outline of the plot. Then it’s just filling in the gaps by writing the story – and accepting that it will all change as I get into the book!

What are you writing now?

Right now I’m working on a new YA novel that I’m really, really excited about – but unfortunately I can’t say anything more just yet! Keep an eye on my website (www.katycannon.com) for news as soon as I’m allowed to share. 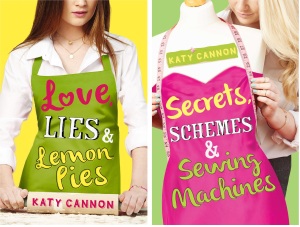 A huge thank you to the lovely Katy Cannon for her wonderful answers, and for the images I have used in this post.