Last month, I reviewed Deirdre Sullivan’s latest book Primperfect, the third and final book in the Primrose Leary trilogy. It was a book that made me laugh and cry, and I was delighted when Deirdre agreed to do an interview with me for the blog. Read on to find out about Deirdre Sullivan’s teenage diaries, some new definitions, the antics of her first guinea pig and more! 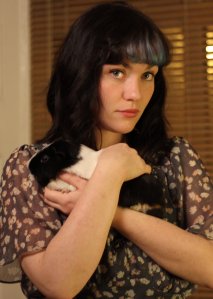 Did you keep a diary as a teenager?
I did- from when I was thirteen till around twenty. I used to fill it full or poetry in different coloured ink. Purple was for woe. Pink for less woe. There was a lot of woe in my diary. Not in my life, though. That was pretty grand. I wrote a vampire screenplay in it as well, where this character, Dubh, who was basically an avatar for me, got recruited to be soul mates and assassins with a Cool Vampire. There were a lot of fight scenes and sketches of medieval-inspired crop tops. It was pretty aspirational.
Prim grows up a lot throughout the trilogy, what was it like writing her at these different ages?
I think the older she got, the easier it was because I could turn off my filter a little and give her more awareness and experience. I enjoyed maturing her, like a fine cheese, and there was enough of a gap between the books that when I came back my voice was a little different as well. I wrote two books, between Prim Improper and Improper Order, and one book between Improper Order and Primperfect. They’re languishing on my computer now. But everything you write teaches you something. Improper Order has more dialogue than Prim Improper, because I was worried I was bad at writing dialogue. Primperfect has more scene setting for exactly the same reason. When I’m writing, I play to my strengths and the more you write, the stronger you become. Or something.
You deal with some sensitive topics in the books, such as coming out and self harm, how do you deal with tailoring these for a younger audience?
I don’t really tailor to them at all. I assume that children can take it. A lot of them have to because they’re living it. I think the first person narrative helps as well, because you kind of see it through her eyes as you write it, and so her opinions and reactions aren’t always clever or sensitive. Which is kind of true to the world we live in. I don’t have a moral agenda when I write. I think that’s dangerous and also not as fun.
There is a lot of humour in the books, which part was the most fun to write?
Every book has a little bit I’m extra fond of. It’s not necessarily the best bit, but the day I wrote it, I was probably extra smug. I like the balloon-popping bit in Improper Order, for example, and the rat funeral in Primperfect. In Prim Improper, it’s the list of things about her mother and the ghost story. I did like writing about Marcus also, particularly in his robot phase. I kind of dampened him down in Primperfect, because I didn’t want to make him always have an amusing trick. He’s a little person,  with his own stuff going on.
I like writing the animal stuff a lot though too, because animals are amazing and ridiculous.

Deirdre Sullivan reading from Primperfect at the launch in Dublin. (Photo by Diarmuid O’Brien)

How did you manage the balance between humour and serious issues in the books?
The humour comes quite naturally to me, I use it as a coping mechanism when stuff goes wrong all the time. I think a lot of people do. And people who are sad, aren’t, like, steadily sad forever. there’s always a little bit of funny or happy to balance out.
Was how the series ended what you had envisioned when writing Prim Improper, or did things change as the books progressed?
Things absolutely changed as I was writing. I’d always have a couple of notes I wanted to hit. Like, a basic beginning, middle and end but I wouldn’t always hit them, like sometimes the characters would surprise me. I realised Karen was gay halfway through Improper Order, and that was a bit of a surprise, because she is very evil and terrible and I wasn’t sure she was entitled to be going through her own drama after all the nonsense she has pulled. With the third book, I wanted to give her a happy(ish) ending. If I was going to leave Prim, I wanted it to be in a good place.
Would you think about returning to Prim’s story, or is Primperfect the last we will see of her?
I think Primperfect probably is the last Prim book. Although, if I got a very good idea for her journey and was excited to write it, I wouldn’t discount it. I do know a bit about what happens to her after Primperfect. The baby is a boy, and they call him Leary after her Mum.
Is there a character in the Prim books who you would like to write more about?
I think Ciara’s family dynamic is really interesting. I think if I was to write a book where they were all grown up, it would be a big thick beach read about Ciara and her millinery empire. And Syzmon would be glowering in the wings, having become a footballer slash robber baron. He might even have purchased the CONTROLLING SHARE in her company. She’s hate that. She always said it was a mistake to go public.
I love the design of the books – the illustrations and typography really give a diary feel. Is this something you had envisioned for the books?
The typography was the brain child of an amazing designer called Fidelma Slattery, and it made me so happy how thoroughly she understood the books and the characters. Like the little cast list in book three and the page that’s all cut up were her idea. Nothing to do with me, but so completely perfect and delightful. One of the great things about the Prim books was waiting and seeing what she had done with the text and it was always amazing.

Prim’s definitions are always entertaining – was there a particular one you liked best?
I had some written for Primperfect that I took out because it was a bit unrealistic that she’d still be at her first year homework thing. I can’t decide, so going to give you some new definitions if that’s okay. Quite fond of stimuli.
Keep: The strongest or central tower of a medieval castle.
Where handsome Vikings like to hole up with their initially unwilling lady sex-hostages.
Stimuli:Things that make things do things.
Were your guinea pigs, Theo and William, an inspiration for Roderick, Prim’s dashing rat friend?
It was my first guinea pig, Sisyphus (2006-2010) who was the inspiration for Roderick. He was quite dashing, and used to escape from his cage by standing on top of a tunnel and head butting the door until it opened. This is not typical guinea-pig behaviour at all. I actually have a picture one of my friends drew of him as a Victorian gentleman, wearing a top hat. I treasure it a lot.
In Primperfect, Prim gets to read her mother’s diaries (at last!). How did you find bringing this new voice into the books?
In the first draft it was half and half and made the narrative messy, because the two books were kind of different genres, YA for Prim, more NA for Bláthnaid. I cut down Bláthnaid’s parts a lot and decided to make them chapter headings instead, that took some of the pressure off and it flowed more easily.
What’s next for you, writing wise?
I’m working on a YA book that’s a bit darker than Prim at the moment. It has a bit of crime in it and things. So, I’m finishing that. I’ve also got a new book coming out with little Island in 2016. It’s one of the books I wrote between Prim Improper and Improper Order and it’s very different from them, but still about teenage girls coping with difficult circumstances. Because teenagers are magnificent and inspiring and have a lot to put up with.

A big thank you to Deirdre Sullivan for her wonderful answers, I cannot wait to read more of her books! If you haven’t already, check out the Prim trilogy (Prim Improper, Improper Order and Primperfect) they are hilarious, moving and quirky, and definitely among my favourite YA books.